​28 Years of Making Music Together
This is the 28th anniversary for both the Victoria Chamber Orchestra and Yariv Aloni’s conducting career in Victoria.

In 1993 a group of passionate string players banded together to explore the wealth of string orchestra repertoire. We effectively became an orchestra in 1995 when Yariv, newly arrived in Victoria, agreed to take up the challenge of conducting us. It was love at first rehearsal, where he led with both viola and baton. Our first public performance featured an inspiring Telemann viola concerto with Yariv as soloist. Together, we have grown musically and technically for a quarter century! That more than half of our members have played in the orchestra for two decades or more, points to how highly we value Yariv and his musical gifts.

Players come from all walks of life; several are music teachers. We have developed two main mandates: the promotion and advancement of string orchestra music in our community and the support of regional young string players. Annually, we proudly present the Louis Sherman Concerto Competition, named after our first benefactor. This event provides scholarships and an opportunity for talented students, age 18 and under, to solo with the VCO.

As we celebrate 28 years of making music together, our volunteer players and board members are honoured to have shared this journey with Yariv.

Hear and see the orchestra 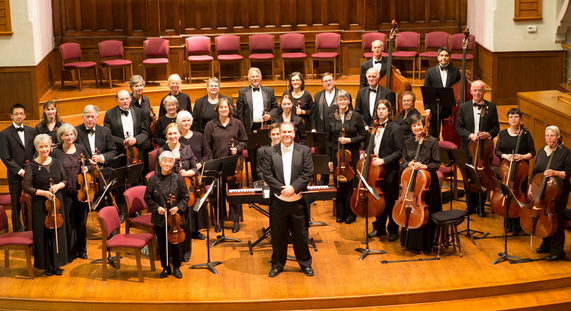