Our 25th Anniversary plans have evolved so that there will not be a Louis Sherman Concerto Competition this year. Instead, three talented candidates have been invited take part in a master class conducted by violinist Nikki Chooi (soloist in our final concert, featuring Beethoven's Violin Concerto on Friday April 17/20 at 7:30 PM, First Met United Church, Victoria). Members of the public are welcome to attend this master class.

We expect to return to our usual competition format in 2021 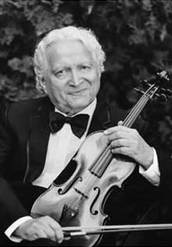 Known for his kindness and generosity toward young musicians, Louis was born in 1907, the eldest of five brothers and himself a twin. He passed away in October of 1999.

After that, he moved to Los Angeles where he played for 20 years in the Freddie Martin Band and the Percy Faith Orchestra. He then played in Las Vegas for 10 years.

In 1979, he retired to Victoria where he played in the Leighton Noble Orchestra, and became the Concertmaster of the Civic Orchestra.

As a benefactor, he has helped to establish the Victoria Chamber Orchestra and has helped many other musicians. He has been particularly supportive of young people, and even gave the young Victoria violinist, Tim Haig, his first set of tails.